Teodor Brandowski pointed out that Sienkiewicz “was truly interested in politics, looking at the then-common pseudo-politics and pseudo-politicians through the prism of comedies and theater.”[1]

The signals regarding the problems that Polish society had to deal with are implicitly present in the texts written in a cheerful tone; critical comments regarding social issues are ironic and humorous. For instance, the colorful figures of the 1875 carnival are presented “against the grey background of poverty, worsened by hard frost”[2]; dancing parties and balls are not very popular due to the lack of money and “the turn of the minds towards more serious matters.”[3] The situation in those days resembled the situation of an ill man who, having treated a bout of his illness, “starts to enjoy his life anew and starts to indulge in various pleasures.”[4] When writing about the sewerage system and waterworks, the author mentions the end of the Pośrednik Society (which was supposed to act as a middleman between the Polish Kingdom and the Russian Empire):

Unfortunately, the Society sank like a stone. We could suspect it went missing somewhere on the way, but it is absolutely certain that it did not leave Warsaw. Imaginez vous, it must have gone missing in Warsaw. People are trying to work out what happened. It did not fall into the Vistula because there is a constant lack of water in the Vistula. It did not fall into the sewage because we have no sewage system. It could have broken its leg because the roads are in bad condition; it could have got broken, killed, run over because the street lights are weak. But to go missing, just like that?[5]

According to Sienkiewicz’s columns, Warsaw, when perceived from the point of view of a broadly understood analysis of space, became the city of paradoxes. On the one hand, it was degraded, reduced to the role of a provincial town, which determined its position in the spatial system understood geopolitically. On the other hand, it was treated as one of the European metropolises, entering the path of industrial development. In Sienkiewicz’s journalistic texts, Warsaw is represented in the context of the neighboring countries: it is compared to the capital cities of other European countries, and the most frequent comparisons concern France, England, and Germany (both in terms of the technical condition of the city and its mental sphere). The foreign context recurs in the comments concerning particular scenes, the comments which show – on the one hand – the backwardness of the city, but – on the other hand – its aspirations and tendencies to follow in the footsteps of other European capitals. Here is a city troubled by technical problems (“Oh, our roads and bridges. What precious monuments you are, both for the poets who love ruins and for the historians, examining the prehistoric culture of the original inhabitants of the globe”[6]). And here is the city undergoing the process of transformation – the extension of the railway, the construction of the water supply system, the growth of the city which, at the turn of the 20th century, entered the phase of modernization. Sienkiewicz’s columns published in Gazeta Polska and Niwa were written in the years 1873-1875, at the time of the transportation revolution, which involved the construction of several railway stations – the Saint Petersburg Station (today’s Wileński Station) in 1867, the Terespol Station (today’s Warsaw East Station) w1867, the Vistula Station (today’s Gdański Station) in 1877 – and the construction of bridges – Alexander Bridge (also referred to as the Kierbedź Bridge) in 1864 and the railway bridge in 1875. It was the time of the first horse cars (however, their condition was not satisfactory). Additionally, the military role of the Vistula Railway and the activities connected with the functioning of the ring railway cast a shadow over the development of transport routes in Warsaw.[7] Sienkiewicz mentions not only the development of the railway but also events such as the meeting of shareholders of the Warsaw-Bydgoszcz Railway (Droga Żelazna Warszawsko-Bydgoska), in which he participated.[8]

Frequently, Sienkiewicz’s irony, emphasizing negative aspects, constitutes a strategy thanks to which  description reveals the technical and social details in the image of the portrayed city:

No-one would want our stone-paved streets, even if we gave them away for free; it is about our railways, the ones that Hamburg is going to build since they are cheap, lasting and comfortable. […] Europe is following our example, huh! We have something that no other city has. Oh, Gods! It comes to my mind that we even have more such things and that I am the first person to notice it. Does any other capital have such horses like the ones that draw our trams? The ones that resemble ghosts or skeletons, seemingly unable to carry their own weight, yet pulling the huge weight of the car and the passengers? Does any other city have such dirty trams? Or so many plans of sewerage and sanitation systems? Does it have such a gas company that, out of concern for the morality of the inhabitants, has the street lamps put out as soon as possible so that good citizens do not roam the streets at night but would rather sleep in their own houses, in their own beds, on their own pillows, and under their own duvets? (I always take on this biblical style when I feel moved).[9]. 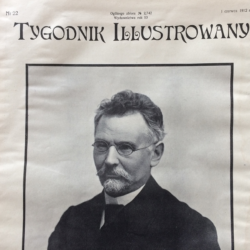 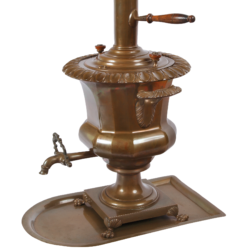 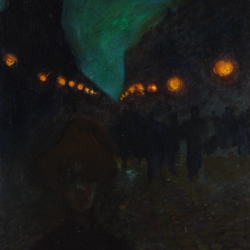 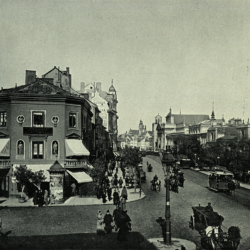 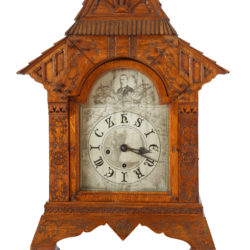 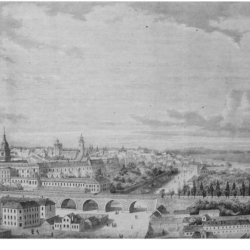